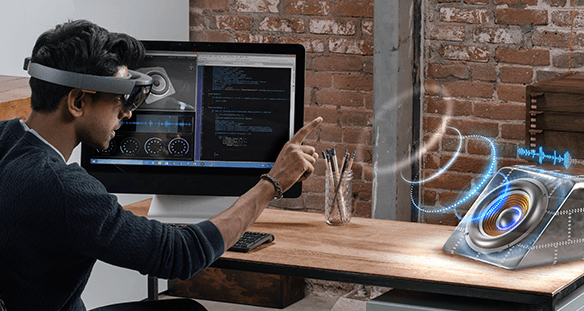 I’ve been casual gamer since I was about 8 years old when I was first introduced to computers. I played a really mean game of Oregon Trail on my Apple II E at school. My first computer had the blazing processing speed of 100mhz. I’ve seen a lot happen both in computers and gaming since then.

Augmented reality, also called “mixed reality,” is finally becoming a reality for the world. Virtual reality was around in the 90s, but never took off because of the high cost to entry for consumers, as well as a massive lack of content available even if you could buy the hardware. Thankfully with today’s breakthroughs in technology, that’s all changing.

I’ve been keeping a close eye on HoloLens and what Microsoft is doing with it. I’m really excited to see how much progress Microsoft has been making, and the amazing product use cases that have been discovered because of it. While I do think it’s really cool technology and we’re barely just scratching the surface of its potential, the real boost it’s going to get is when it’s beyond the home. Many use cases are gaming at home, but where I think it’s going to be much more prevalent is outside in every day life.

Think about walking down the street and looking at 15 restaurants and being able to see which of your friends have eaten at any of those 5restaurants, and their average reviews. Instead of looking down at your phone to look around on Yelp, you can just look around in real life and get instant results. Saves time and energy and provides much more data at our fingertips…hmm maybe we should relabel that to “data at my eyelids” since that’s where we’re going. We need to be thinking about to how to make that data more accessible, faster to access, and continue making it user friendly.

What spurred on this blog post was the video I was watching today about HoloLens, so go ahead and take a look at what’s coming next.